Cathyleen Williams of Barstow shuddered as she listened to the claims agent from the state‚Äôs unemployment insurance program. 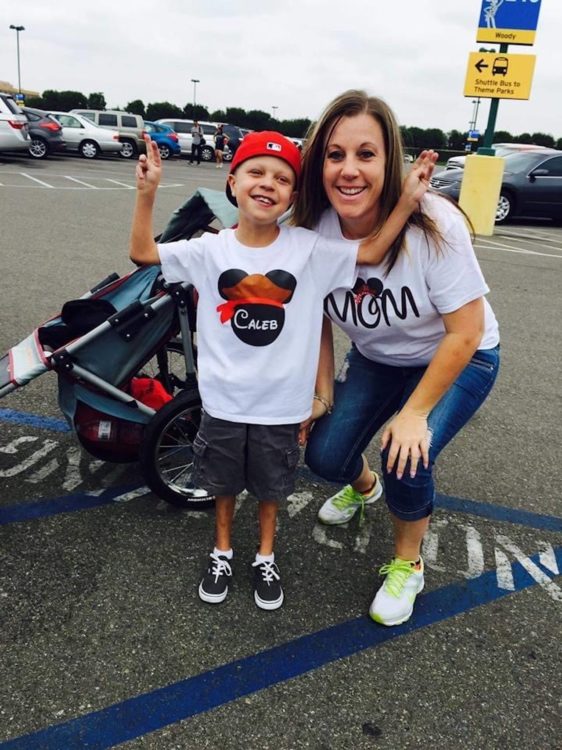 Cathyleen Williams of Barstow¬†with her late son, Caleb. Caleb suffered from a congenital heart defect and required round-the-clock care. When he passed away in 2016, Cathyleen was shocked to learn she wasn‚Äôt entitled to unemployment benefits, even though she‚Äôd been paid by the state to be his full-time caregiver.¬†Courtesy of Cathyleen Williams.

Williams, a single mother, couldn‚Äôt believe what she was hearing. For almost a decade, she‚Äôd relied on the full-time, minimum wage from the In-Home program to care for her son, Caleb, who had a rare birth defect called hypoplastic left heart syndrome and needed round-the-clock attention. How was she going to immediately find a job while dealing with the loss of her child?

‚ÄúI was floored, devastated,‚ÄĚ said Williams, whose son died of complications from influenza in 2016, at age 9. ‚ÄúI thought, in the midst of your grief, you shouldn‚Äôt have to worry about how you‚Äôre financially going to take care of yourself.‚ÄĚ

Williams did find a job five months after Caleb died, and was able to stabilize her finances. But the desperation she felt in the wake of his death after realizing she had no unemployment safety net to fall back on, set her on a quest to prevent other family caregivers in the In-Home program from suffering the same fate. This week that quest appeared to be nearing an end, as a bill to extend unemployment compensation to family caregivers enrolled in the In-Home program and another similar one called Waiver Personal Care Services, headed to Gov. Gavin Newsom‚Äôs desk.

Given the high rate of unemployment amid the COVID-19 pandemic, the bill is needed more than ever, she said.

‚ÄúIt‚Äôs going to be catastrophic for these parents‚ÄĚ if the bill doesn‚Äôt pass, she said. ‚ÄúWith (more than) a million people on unemployment and no jobs to really be found, how are we going to take care of them? What are they going to do?‚ÄĚ

If signed into law, AB-1993 is expected to extend unemployment eligibility to more than 119,000 family caregivers, who are primarily low-income women of color, according to the home care workers union United Domestic Workers of America/AFSCME Local 3930. Supporters say that‚Äôs only fair, given that people employed as in-home caregivers who are not family members do receive unemployment benefits if they lose their job.

Assembly member Sydney Kamlager (D-Los Angeles), who introduced the bill, said the current policy of excluding family caregivers from receiving benefits is the product of outdated, discriminatory attitudes toward women.

‚ÄúMost parent and spouse in-home supportive service providers are wives and mothers,‚ÄĚ she said in a statement. ‚ÄúThey‚Äôre excluded from receiving unemployment because domestic labor has always been seen as ‚Äėless than‚Äô because mostly women do it. As we rebuild California‚Äôs post-pandemic economy, we need to eliminate sexism and racism from the fabric of our society and guarantee equity to all workers.‚ÄĚ

The estimated cost to the state of extending eligibility is about $14 million annually, according to an analysis of the bill from the state legislature. The final bill garnered unanimous support in the state Assembly and Senate. Gov. Newsom has until Sept. 30 to sign it.

Backers of the bill, including the home care workers union United Domestic Workers of America/AFSCME Local 3930, say it will help stabilize the in-home caregiver workforce, which is heavily reliant on family members because of a shortage of other workers available to do the job. The goal of the In-Home program is also to keep low-income children with disabilities and the elderly in their homes, generally a more comfortable choice for families, and less costly to the state than paying for a residential care facility.

Mirna Ruiz, a Rialto single mother of two children with disabilities, said she thinks the bill is overdue. Ruiz has relied on the In-Home program for 12 years, after being forced to quit her job as an insurance writer to care for her now 24-year-old son with a heart condition, seizure disorder and mild cerebral palsy. She also has an 18-year-old daughter who is deaf and required surgery and auditory verbal therapy as a child.

Even with the In-Home payments, Ruiz said she had to move in with her mother to make ends meet. If she were to lose that support, she wouldn‚Äôt be able to afford basic necessities, she said.

Ruiz, who is 48, said she and other caregivers ‚Äúliterally dedicate our lives to our kids.‚ÄĚ To not have a financial cushion after the loss of a child would be devastating, she said.

Williams knows that feeling. She now runs her own nonprofit, helping provide support and guidance to families of children with disabilities. She‚Äôs heard from many parents over the years that have felt the financial impact after their child died and they stopped receiving In-Home support. Some lost houses, cars and other possessions as a result.

Grieving is ‚Äúall you should have to worry about when your baby dies,‚ÄĚ Williams said.

This story was produced in partnership with the California Health Report.